Best Months to Travel to Greece and The Greek Islands

Best Months to Travel to Greece and The Greek Islands

Millions of people each year dream of travelling to Greece, but they don’t know when the best time to go is.

If you’re not sure when the best time to go to Greece is, you may end up waiting forever and never going at all.

You can read this post which has all the information you need about the best time to travel to Greece. We have detailed information about the weather, prices, and what there is to do in each month.

In general, the shoulder months which are spring (from April to mid-June) and fall (September- October) – are the ideal period to visit Greece. The weather is moderate during these months, the days are long and sunny, both cities and islands are less crowded.

Of course, as these shoulder seasons fall outside of the summer holiday season, it may be more difficult for families to travel because of school or job limitations, but if you could go between the May and October half-terms, you will enjoy Greece in the best way!

July and August are the top summer months and as a result, famous destinations become extremely congested. For instance, airplanes, boats, hotels and luxury villas in Crete, Mykonos, Paros and Santorini are frequently booked in advance so that everything is getting more expensive during this period. Furthermore, it is worth remembering that weather is very hot in Greece throughout July and August, with temperatures typically hovering in the 30s and 40s! 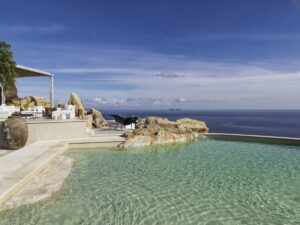 August is also the month when the majority of Greeks take their yearly vacation. As you can imagine, this month is overcrowded almost everywhere you can find a beach to swim. 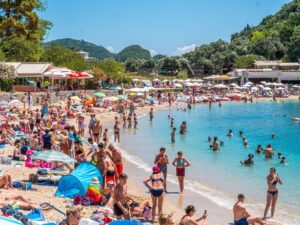 If you are more into privacy and a tranquil vacation landscape, you should better avoid going to Greek islands during the month of August at all costs. Especially around the 15th of August, which is a major religious day in Greece and everyone is on vacation. In case July is your only option, you could also visit one of the numerous, less-known but equally fabulous greek islands. Paros, Skiathos, Syros, Andros, Karpathos, Zakynthos and Astypalea are only a few examples.

Last but not least, we have to say that Athens is rather deserted in August, mainly because it is the locals’ basic holiday period. That means that you can move around very easily in the capital city of Greece , do your sightseeing in the most convenient way and even find Athenian Riviera luxury villas at extremely affordable prices. However, the weather is still so hot and especially during the daylight, it is not at all easy to remain outdoors for a long time.

From the middle of November to April, most accommodation facilities and restaurants on the islands are closed, so it’s not one of the greatest seasons to visit a Greek island. Of course, there are still places to stay and dine but your options are restricted. The weather is likewise not ideal throughout the winter (many days are rather cloudy or rainy with low temperature), so don’t expect Greece to be a blazing winter sun destination.

The big islands with stable population throughout the year, such as Crete, Syros, Rhodes and Corfu, are way better to visit during the low season since they have a year-round tourism orientation and many activities to enjoy. There are many places that remain open in Santorini throughout the winter as well, so this is a superb time to explore the scenic island in peace and tranquility! If the weather is not too windy, you should definitely have a unique time there in the winter. 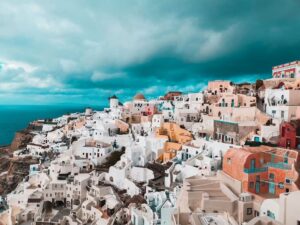 The coldest months are generally December through March and they are often combined with much rain and (less often) snow. If you don’t want to visit the bigger islands and instead prefer to visit the mainland like Athens, Thessaloniki or maybe Nafplio, as well as major ancient sites like Delphi, Meteora and Ancient Olympia, then you might consider visiting Greece during this time period. Hotels and restaurants on the Greek mainland do not close during the winter and everything is cheaper and less busy.

When is the Best Time to Visit the famous Greek islands?

Due to the ideal weather and frequent air or ferry services, the summer shoulder season is ideal for island hopping in Greece. All ferry lines start their frequent schedules at the end of May/beginning of June, allowing you to visit several islands in a few weeks (rather than having to wait for several days on each island during the winter scheduling).

During July, August, Christmas and Greek Easter time, the ferry services and flights are particularly popular, so if you want to come during these months, you should always book ahead of time.

From October to March, ferry services and flights are hugely reduced, particularly towards the smaller islands, although there are many bargains to be had.

When is the Best Time for Swimming & Relaxing on the Beach?

As the Mediterranean, Ionian and Aegean Sea waters have had time to warm up over the summer, the latter months of the year are ideal for enjoying them. The Aegean Sea is undoubtedly one of the nicest places in the world in terms of waters, with rarely any waves, little tide variations and pleasantly balmy temperatures in September and October. If you’re feeling bold enough, you might be able to swim off the coasts of Greece until November or December (if the sun is shining!).

When is the Best Time for Sightseeing in Greece?

Greece offers several magnificent cultural landmarks that are a must-see for anybody interested in history or philosophy. Fortunately, most sites are accessible all year round, so you may explore ancient ruins and temples regardless of the weather. 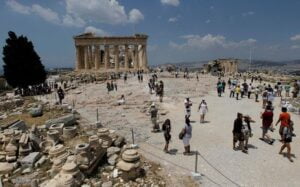 It’s ideal to visit Greece’s important sights between April and June, or between September and November, when temperatures aren’t too high to impair your experience. If you want to go sightseeing in Athens, you may do it pretty much any time between September and June because it doesn’t really matter if you visit during the winter.

When Is the Best Time to Do Outdoor Activities?

Spring and autumn are the finest times to visit if you want to do things like trekking Greece’s lovely island paths or bird viewing. During the spring, the mountains and fields are ablaze with a plethora of wildflowers and the temperatures have yet to become too warm for daytime trekking. 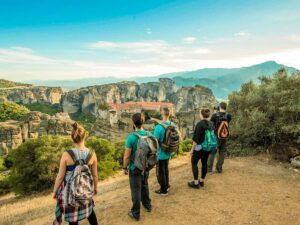 In the spring, Lesvos, Crete, and Tilos are all excellent places to go bird watching. Crete also has some of the greatest walking routes in Greece, with the famed Samaria Gorge being a popular destination.

When is the Best Time to Experience Greece’s Nightlife?

Many Greek islands have become famous for their nightlife throughout the years, with everything from night cafe-bars to sophisticated beach-front clubs in Mykonos. Today, the islands of Mykonos, Paros, Ios, and Skiathos have the wildest nightlife, with world-renowned DJs visiting throughout the summer months of July and August. The night music events here match those in Ibiza and the magnificent scenery makes for an unforgettable party vacation! 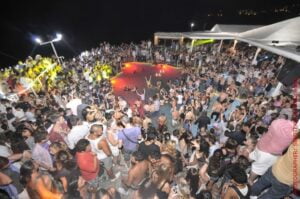 Party in a Mykonos Club

As far as Athens is concerned, we have no hesitation to say that it’s the city that never sleeps during the whole year. There are countless options for everyone to enjoy during the night based on his music favourites or any other preferences. Athens has got you covered in every possible aspect. The time of year that you visit Athens only differentiates the places(either indoors or outdoors) where the party is being held!

When Is the Best Time to Visit Greece for Events?

Throughout the year, there are several events worth attending, ranging from religious holidays to cultural festivals.

Greek Easter is by far the most important festival in the Greek calendar. In 2022, Greek Easter is on Sunday, April 24, although the celebrations begin a week earlier. Easter is celebrated in a variety of ways around the country, but you can always bet on lamb roasts and fireworks. Easter in Corfu and Leonidio are the most popular but wherever you go in Greece around this time, you can expect to see at least some of the country’s very best traditions. 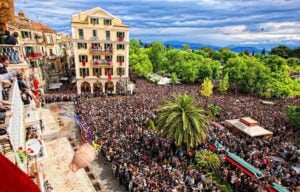 The majority of music and cultural events are in full flow throughout the summer. The Athens and Epidaurus Festival is the country’s most prestigious annual summer arts festival, with events held at the ancient Odeon of Herodes Atticus theatre beneath the Acropolis and eastern of Peloponnese (2 hours driving from Athens) at the stone theatre of Epidaurus, a well-preserved theatre with rich historical tradition. The events are normally scheduled from late June to early August and feature a mix of classic and modern style. 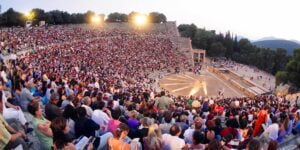 Moreover, there are many traditional festivals held during August in many places of Greece, either on the mainland or on the islands, because of religious celebrations. We would definitely recommend experiencing these festivals where you can taste local food and enjoy yourself to the maximum, listening to traditional local music as an extra!

The well-known International Film Festival in Thessaloniki (vice-capital city) is typically held in early November. While they are unlikely to improve anyone’s cultural experience, Black Friday shopping activities in November have recently grabbed Greeks by storm.

Christmas in Greece isn’t as big a deal as Greek Easter, although there are festive lights in major towns and also New Year’s Eve in Athens brings celebratory fireworks above the Acropolis. 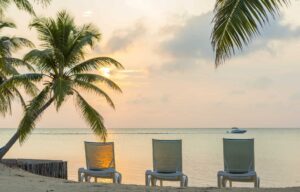 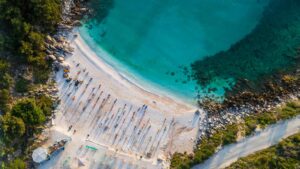 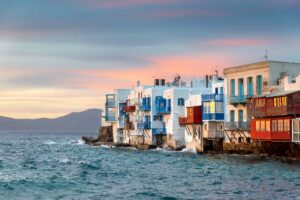