Mykonos is one of the most famous Greek islands. Located in the Cycladic region of the endless Aegean Sea, in Mykonos you will come across amazing beaches, beautiful nature, cosmopolitan villages, traditional Greek food and a chic lifestyle. Mykonos is also very famous for its incomparable nightlife. It is called by many the Ibiza of Greece, since partying till morning in famous clubs with world known DJs next to movie stars and celebrities it is something common that happens every summer. Mykonos is the perfect island not only to see people but also to be seen, to relax but also party for hours, to step on virgin beaches and crowded ones and enjoy the undeniable tasty Greek cuisine. Check the 14 unmissable things to do in Mykonos.

1. Explore the alleys of Mykonos Town

The heart of Mykonos is with no doubt Mykonos Town, which is called Chora. With its endless, traditional, cycladic blue, its white houses and its tiny streets full of shops, churches, and windmills, Mykonos Town is the place to be. Each little corner and every beautiful house is a moment that it should be captured in a photograph.

Mykonos Town offers a variety of things to do; from bars to restaurants and cafeterias, to fashionable clothes and accessories boutiques, you’ll never run out of ideas and things to do! Here you will have the opportunity to pick up some traditional Greek souvenirs, like olive oil products or leather sandals and postcards for memories that you’ll remember for a lifetime.

Located on the northwestern tip of the island, you will surely notice Armenistis Lighthouse because of its height – it is 19 meters (62 ft) tall. It is a scenic attraction, which offers great views to the Aegean Sea and to the neighbouring island of Tinos as well, which is located in the background.  See the boats passing by between these two islands. The lighthouse is approximately 7 km (4.35 mi) away from Mykonos Town and you can reach it by car, simply taking the north coastal road and following the signs to Fanari.

One of the most famous and characteristic places in Mykonos is the windmills of Little Venice. It is named ‘Little Venice’ because of its similarity with Italy’s Venice concerning its architecture and exceptional beauty. Located in the Mykonos Town (Chora), you can get there and relax, choosing between the various bars and cafes right on the shore, enjoying  the view of Little Venice. You can also visit the windmills and take a cruise from Ormos Port as you watch the sunset from the sea.

One of the most popular and crowded beaches of Mykonos, Platis Gialos Beach, is located in the southern part of the island, about 4 km (2.48 mi) from Mykonos Town. Because of its deep white sand and crystal turquoise waters is an attraction to visitors from all over the island. Platis Gialos Beach is accessible by bus and by boat. You can find beach bars, taverns and sunbeds, as it is a fully organized beach. The only things you have to do there is to relax, sunbathe and enjoy the gorgeous clear waters. You can also catch a boat from Platis Gialos to other southern beaches (Paraga, Agrari, Elia, Paradise and Super Paradise).

Located in Paradise Beach, in the southern part of the island, you will find Tropicana Mykonos Club. Before getting there keep in mind that the fun starts as early as 4:30 in the afternoon and finishes late the next morning. Its epic parties have been unforgettable to everyone who experienced them. Music vibes create a party atmosphere, people are dancing all the time and tasty cocktails are served. Tropicana Beach Bar is ideal for relaxing on the beach, sipping a cold drink in your comfortable wooden chair under an umbrella. Visit Tropicana Restaurant for Italian and Greek traditional dishes. Bear in mind that Tropicana Restaurant is self-service only. The Travel Channel named Tropicana as the Best Beach Bar in 2012 and in 2011 and 2009 as the second Sexiest Beach Bar in the world. It is definitely the place to be if you want to have fun, flirt and dance.

The windmills are considered to be one of the most famous markers of the Cyclades islands. In Mykonos, they are a landscape landmark as they appear above the sea, on the small hill southeast of Chora.

They have a distinctive rounded shape, snow-white color and wooden pointed roof, features that make them ideal for the quite extreme winds of Mykonos. They were originally used for grain grinding, activity that has contributed to the island’s economic evolution.

Nowadays, the windmills have no longer practical use. They exist as a symbol of Mykonos and an ornament to the island.

Today, there are 7 windmills in Mykonos that are kept in a quite good condition due to considerable renovation. Bonis Windmil, the most famous of all (Agromuseum of Mykonos), it is now a museum where you may find various activities taking place. Visitors should keep in mind that its opening dates and times are from 1st July till 30th of September each year, from Monday to Sunday, 16.00-20.00. If you want to be part of the past for a while, or if you are simply curious to see how windmills look like from the inside, then you have to visit them as soon as possible!

One of the most famous architectural and religious monuments of the Cyclades islands in total is the Church Panagia Paraportiani. It is located in the cultured center of the island right next to Aegean Sea, with direct access and sits on the old Castle of Mykonos.

Paraportiani took this name because of its location. In fact, it is located next to the small gate (“paraporti” in Greek) of the medieval wall of Mykonos. It is a two-storey building, which consists of five churches. Four of them are on the ground floor and one is elevated. The elevated church is the one with the name of Panagia Paraportiani.

Created in the first period between the 16th and 17th centuries and because of the fact that its architectural heritage is irreplaceable, it is for years an important monument not only for Mykonos but also for the whole Aegean islands. It is, undoubtedly, one of the most photographed places of Greece and everyone who travels to Mykonos should visit it.

Mykonos’ beauty doesn’t stop to its land, visitors can admire also the marine life underwater. Discover the magic of Cycladic depths by diving at Paradise Reef and exploring the wide variety of marine life. Underwater you will meet different species interacting, such as sponges, nudibranchs, colorful wrasse, sea bream, barracuda, starfish and octopus.

On Paradise Beach., on the south side of the island, between Super Paradise and Paranga just 4.5 km (2.79 mi) away from Mykonos town you will have the opportunity to be introduced  by experts at the beauty of the water and they will guide you through an unforgettable experience. You can rent all equipment and do all levels of lessons from beginner to professional.

Make sure to make an early booking and rent the best Mykonos Villa for your needs!

9. Tour the Ancient City of Delos

Enjoy a day trip at one of the most important archaeological sites of Greece, Delos Island, located very close to the cosmopolitan island of Mykonos. Delos was considered the holy island of ancient Greece, the birthplace of Apollo and Artemis. It is an imposing place, with no vegetation but exceptionally brilliant and full with the remnants of ancient Greece.

One of the things that make Delos stand out, is that it is the only place in Greece where ancient private homes have been found in a wonderful state: temples, theaters, stadiums, gyms and other monumental structures and buildings have been discovered in many places. They are well-reserved, give us great perspective and vivid image of the architecture, indoor layout and decoration, water supply etc.

The whole island of Delos has been declared a World Heritage Site and is protected by UNESCO. Additionally, the European Economic Community and the Greek State undertook the funding for the huge project of preserving and restoring the monuments.

Daily trips to Delos can be arranged during your stay as part of a daily cruise. Enjoy a day in a private yacht, cruise to Delos and swim at the crystal clear water of the neighboring Rhenia island, enjoy lunch at a traditional Greek Tavern and make everlasting memories of your vacations in Mykonos!

If you’re looking for a bite to eat, you can always enjoy a traditional Mediterranean lunch or dinner at one of the numerous Greek taverns located all around Mykonos. Either with panoramic sea view, by the sea or located in an alley full trees you will enjoy Traditional Greek Food in unique settings which combine the beautiful and elegant environment with stylish decoration and intimate atmosphere.

11. Go on a shopping spree along Matogianni

The most known alley in Mykonos is without doubt Matogianni Street. There is nothing you cannot find on this market, from luxury stores, international brands and jewelry stores to small shops full of hand made traditional souvenirs and works of art. All the shops, no matter how luxury or well-known brands are, all retain traditional Cycladic architecture, keeping the traditional style of the island.

At this area you will also find cozy cafes, bars, traditional taverns as it is Mykonos’ hotspot.

One of the must-see places in Mykonos is definitely the “Mykonos Folklore Museum”.
Located between the crowded alleys of Mykonos Chora, it links the traditional past with today’s modern image and gives visitors great insight of the contrasts that make Mykonos so special.

Located in the Castle just a few steps away from the famous Panayia Paraportiani, Mykonos Folklore Museum is housed in an old two-storey captain’s house. It includes six main halls that host collections of old furniture, Byzantine icons, folk ceramics, old commemorative dishes and decorative / historical items. Also, there is a great collection of embroidery and weavers, keys, measures and stations, fine collection of ship models etc. There is also an important record of manuscripts and forms, photographs, maps and a library.

13. … and the Aegean Maritime Museum 5 minutes’ walk away

Just a short walk from the Folklore Museum lays the Aegean Maritime Museum, housed in a traditional Cycladic building of the 19th century which belonged to the legendary Master Nickolas Surmeli who helped the Cretans in their struggle against the Turks.

At the museum guests marvel all kind of exhibits, from ship dunks dated from the pre-Minoan period all the way to the early 20th century, historical documents, rare engravings and maps, ancient objects and tools, as well as nautical patterns from the 5th century BC. Special mention should be made at the Museum’s library which consists of about 5.000 rare booked, old and modern publications, a collection of documents, photographs and it is continuously being enriched.

In the garden of the Museum there are marble copies of successive columns with relief depictions from Delos and Mykonos, referring to shipwrecks and sailors lost in the sea.

14. Catch a show at the Cine Manto

In case you are in Mykonos between June 1st to September 30th, a great way to start you night is catching a movie at the open-air Cine Manto, located inside the Municipal Garden of Meletopoulos in Matoyianni. Set in a beautiful environment full of palm trees and cactuses, enjoy first worldwide released films and box-office productions under the beautiful Aegean Sky.

Inside the cinema, there is also an old church and a café-restaurant which is open all day long with refreshments and drinks, breakfast or brunch menus and dinner.
Dinner and a movie under the beautiful night sky, what else can you ask for? 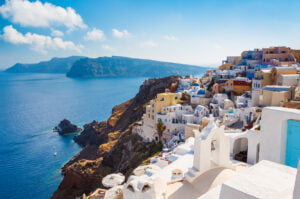 Top 10 Villas for Rent in Mykonos | The Ultimate Guide 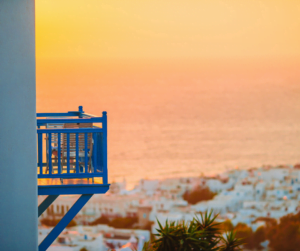 Where to Stay in Mykonos | The Ultimate Guide

Read More »
NextHow to travel like a billionaire in MykonosNext